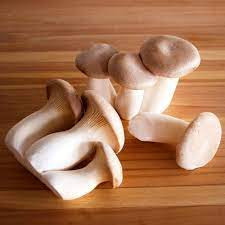 The king trumpet, eryngii or king oyster mushroom is the largest of the oyster mushroom genus and, unlike other oyster mushrooms, their stalks aren’t tough and woody to eat. Instead, they're hailed for their meaty texture and umami flavour. Native to the Mediterranean, they are perhaps most commonly used in Asian cuisines such as Chinese, Japanese and Korean; three countries where the mushroom is cultivated on a large scale.

This impressive mushroom averages between 10–15cm in length, has a long shelf life in the fridge (roughly one week) and doesn’t lose its shape when cooked. The texture is sometimes likened to abalone or scallops, which makes them an interesting option for vegetarians and are often billed as ‘mushroom steaks’ or ‘vegan scallops’.