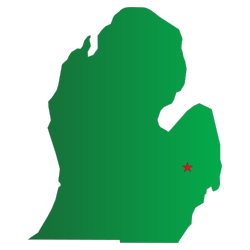 Nestled in the rolling hills of Metamora, Michigan, two high school sweethearts bottle some of Michigan’s finest raw honey. Jeff and Erin Melton, who met in band camp, decided to move away from the bustling metropolis of Utica and purchased 5 acres just outside the city of Lapeer in 2001. The Melton’s only desire was to build a home and raise a family to live the simple country life. Little did they know, that their next door neighbor was about to introduce Jeff and his family to the world of beekeeping.

With a buzzing 55 hives, Jeff assisted his neighbor, and before he knew it he had become an apprentice beekeeper. Learning all the ins and outs of beekeeping and honey, Jeff took over the operations when his neighbor decided it was time to leave the bee life and move to Florida. This gave the Melton’s the opportunity to really grow Good-Rich Honey. Building a large red barn, they finally had all the space needed to store and bottle pure raw honey.

Raw honey is the purest form of honey as it is unheated, unpasteurized and unprocessed. This is perhaps the most important trait of the final product, as it preserves the natural vitamins, enzymes, phytonutrients and other natural elements unlike processed, commercial honey. Some of the benefits of raw honey include supporting immune, cardiovascular and digestive system health. And though not scientifically proven, consuming local raw honey may help develop immunity to local pollen thus reducing allergy symptoms. Jeff can personally attest to the allergen immunity benefits of raw honey. When he moved out to the country, his allergies were horrendous. Once he started procuring honey, he inevitably was consuming copious amounts of honey which resolved his seasonal allergy.

Bees are the happiest on sunny days because they are busy working. If it’s a gloomy day, you can bet that the bees are extra grumpy so look out!

A drone is a male bee that is the product of an unfertilized egg. Unlike the female worker bee, drones do not have stingers and do not gather nectar and pollen. Their sole purpose is to mate and once they mate with the queen, they die.

Throughout a female bee's life, they hold several different jobs. Their very last job is to become a worker bee. Once they are a worker bee, their lifespan is about 2 weeks. As Jeff would say “they work until their wings fall off”.